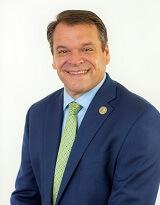 Delegate Keith Hodges of the 98th District, who owns the Gloucester Pharmacy and completed his education at the University of Richmond, Virginia Commonwealth University and the Medical College of Virginia, strives to find solutions to the complex challenges residents and business owners on the Middle Peninsula continue to face in rural coastal Virginia.

Hodges’ community service over the years has included serving on the Riverside Walter Reed Hospital Board, the BB&T Local Advisory Board, Relay for Life and the local area chambers of Commerce. Hodges is also a volunteer pharmacist at the Gloucester-Mathews Free Clinic and has coached parks and recreation and Little League T-ball teams.

His legislation has worked to bring more opportunities to the Middle Peninsula and other rural coastal Virginia localities that allow them to compete more equally with other more urban areas for economic development opportunities while also still protecting the natural resources that make the region so unique.

In Richmond, Hodges serves on the Health, Welfare and Institutions Committee, General Laws Committee, Chairing the Rappahannock River Basin Commission, Co-Chairing the Joint Commission on Coastal Flooding, Chairing the Chesapeake Bay Restoration Fund Advisory Committee, serving as Vice-Chair for the Rural Caucus, and as the legislative member of the Advisory Board for the Middle Peninsula Alliance, the regional economic development authority.

Hodges and his wife Shelley have been married 30 years and have two daughters. They attend Urbanna United Methodist Church.